We sell a lot of Willamette Valley Pinot Noir, probably more than just about anyone else in the area. In the 10 years I’ve worked here, we’ve journeyed together through vintages warm (2006, 2009), cool (2010, 2011), confusing (2007, 2013), and highly acclaimed (2008, 2012). But none of the past vintages prepared us for the gloriously ripe yet sublimely elegant Pinot Noirs coming from 2014. The wines are delicious now, will go longer than average in cellar, and – in a rare twist – are much more available than usual.

No New World wine region sees more year-to-year vintage variation than Oregon’s Willamette Valley. And, I’d argue that’s a good thing! It’s been well over a decade since the Willamette Valley had a “bad” year for Pinot Noir, and farming and winemaking keeps getting better and better – so the wines are always of very high quality.

But with very different weather from year to year, Willamette Valley Pinot Noirs are unique among New World wines in how they showcase differences in vineyard and vintage conditions. And the conditions of Oregon’s 2014 vintage were nothing if not unique!

A Couple of 2014 Puzzles
First puzzle: how could 2014 be Oregon’s warmest growing season ever even though it never got super hot? Yes, there were nearly 30 days of 90 degree or higher daytime temperatures, but nothing like the weeks of 100+ seen in 2009 or the hot drought of 2006. But, 2014’s nights were much warmer than usual. Normally, cool nights bring ripening to a halt and stretch out the time between fruit set in the spring and harvest in the fall. In 2014, the vines kept on chugging away all night long, meaning that growers spent all summer worried that berries would ripen too soon, before complex flavors could develop.

Second puzzle: how could having much bigger crop loads than usual be the key to high quality? Normally, Oregon growers try to limit their vines to about 2 tons of fruit per acre, cutting off excess grapes during the season to ensure that vines have enough energy to fully ripen the remaining fruit by harvest time.

In 2014, the season opened with a huge fruit set, giving some vineyards a potential crop of 4-5 tons per acre. As the warm season saw vines try to speed ripening along too fast, smart farmers decided that giving the vines more work to do than usual might help slow things down. So, instead of dropping half or more than half of the large fruit set, they kept 20-40% more grapes per vine hanging. Everyone assumed that ripening would slow as the weather cooled in September and that the extra fruit could be cut off then.

The good news: hanging more fruit did slow down ripening enough to let 2014 Pinot Noir develop plenty of flavor, generate silky sweet and ripe tannins, and avoid amassing too much alcohol. The better news: pretty much all of the fruit got all the way ripe, even the portion growers had planned to cut off!

The only bad news: with yields 20-40% higher than normal and almost no grapes eliminated during sorting, winemakers went crazy trying to figure out where to put everything!

2014 Power, Elegance, and Charm
So, after all of that, what should you expect from 2014 Willamette Valley Pinot Noir? In a word, “Yumminess.” As Oregon’s Ken Wright said in describing the vintage:

“The wines in general do not taste like they are from a warm vintage, they are not big wines for the most part, they are by and large graceful, aromatic, nuanced and deeply complex wines. They are in great condition and our feeling is that they are going to be long lived and very serious wines that will happen to provide early term pleasure and satisfy both the hard core Pinot Noir drinker and those that are more casual with their varietal allegiances.”

I’ve tasted about 40 of the 2014s so far including finished wines and pre-bottling samples in Oregon last month, and my conclusions are similar. There is an immediate deliciousness to almost all the 2014s that captures your attention right out of the gate and can all too easily lead to uncritical glugging. You should try to avoid that, however, as there is more going on in these generous wines than you first realize. By all means, drink ’em young anytime you’d like a delicious, silky smooth, mouthfilling Pinot Noir by itself or with any Pinot-friendly food. But do try to give a few bottles some cellar time and watch how they get more complex and layered, even as they stay friendly and, well, yummy!

I’m not sure whether any Oregon winemakers would agree with me, but I find the 2014s to be a lovely cross between 2012’s ripeness and depth and 2010’s purity and elegance. If you want to have to work to enjoy a wine, then 2014 Willamette Pinot is probably not for you. Fine – that leaves more for the rest of us!

After years of crazy weather, short harvests, and very good quality, 2014 is a HUGE relief – if not especially easy for winegrowers. Yields returned to something closer to “normal” levels with no loss of quality, although the weather remained unpredictable.

The growing season started very early, with a warm spring getting the vines going about three weeks earlier than normal. The early growing season seemed promising, relaxed and abundant, at least until late June when a series of hail storms swept up and down the Cote d’Or, costing growers 10-30% of their fruit. Then, the weather turned cool and stayed that way through all of July and August.

The warm, dry spring followed by cool, wet summer, meant that the growing season lasted a bit longer than usual – instead of the typical 100 days from flowering to harvest, most growers ended up hanging their fruit for an extra week or event two. The fruit that came in during late September was ripe in terms of skins and seeds, but had a bit less juice and a touch less sugar than might have been expected.

Thick skins, ripe flesh, skins and seeds, plus moderate sugars came together in fermentation vats to create some of the most delicious, immediately tempting wines we’ve seen from the Cote d’Or since 2009.

“I am avidly enthusiastic about the 2014 vintage in the Cote de Nuits…While it is true that the 2014 vintage is user-friendly in that in many cases the wines will be accessible young, I believe that it is also true that they are going to age extremely well. There is a beguiling freshness coupled with first-rate drinkability that makes the 2014s extremely pleasurable… Two of the aspects that I like best about the 2014s is their transparency to the underlying terrior coupled with their sheer drinkability. This transparency is enhanced by terrific vibrancy because the wines really do taste alive in the mouth…They’re ripe yet they are what the French call digest, or refreshing, where the first sip invites the next which is in fact what makes them so drinkable.” 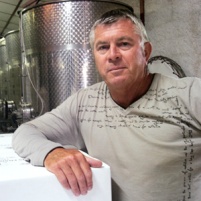 Jean-Michel Guillon agrees with Burghound’s assessment, saying of his 2014s, “They’re generous and fleshy and easy-to-like though with good freshness and transparency. They’re the kind of burgundies that almost everyone likes because there’s really nothing not to like.”

One thing we especially “like” about Jean-Michel’s wines are the prices – unchanged from 2013! In a world where first-rate Cote de Nuit’s producers’ “regular” Bourgognes can often top $40, it’s refreshing to be able to enjoy the work of a true Burgundy master for comfortable prices like these. 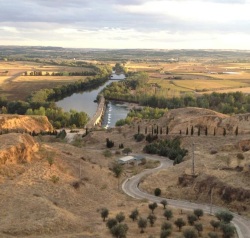 Look down on the gentle hills, Roman bridge, and sprawling vineyards from the hilltop town of Toro and you’ll find yourself thinking, “Really? They can grow good grapes here?”

This extreme western portion of the Spanish province of Castilla y Leon is hot, barren, and dry. With summer high temperatures reaching 100 degrees and only 14 inches of rain annually, it’s very nearly desert. And, the high altitude (most vineyards sit at 2,000-2,500 feet above sea level) means that even summer nights get cool and that winters are bitter with mid-winter lows in the teens.

And yet, wine grapes have been grown here for 1000 years or so. With so little rainfall, early farmers adopted a strategy of planting their vines far apart – as much as 10 feet in all directions can separate vines in the stoniest soils. With these ultra-low densities, each grape vine can spread its roots broadly and deeply to capture the all too scarce rainfall.

Over the centuries, a new mutation of Spain’s Tempranillo grape emerged, one that was best able to handle the extreme temperatures and dry conditions. The locals called it “Tinta de Toro,” and it remains the best red wine grape in the region today.

Ample sunshine and hot days Tinta de Toro to ripen to powerful levels, but the cool nights “fix” color and the bright acidity needed to balance massive fruit levels. By medieval times, Toro reds were some of Spain’s most famous, but the region faded from attention with the rise of Rioja (located closer to the all important rail line to Bordeaux) in the 1800s. By the mid-1990s, only 6 wineries remained in operation here, all producing ripe but rustic reds for bulk sales or local consumption.

A Toro Revival
Today there are more than 50 commercial wineries in Toro, and Finca Sobreño’s success is a big reason why. In the mid-1990s, current manager Roberto San Ildefonso and a group of Rioja winemakers created the Bodega to take advantage of the hundreds of acres of old-vine Tempranillo remaining in the region. They build one of the first modern wineries in the region, purchased 200 acres of prime vineyard and eventually locked up access to another 400 acres of old vines as well.

Over the past 20 years, Roberto San Ildefonso and his daughter Paloma have established Finca Sobreno as one of Toro’s most outstanding wineries. By the 2006 harvest, Wine Advocate already recognized Finca Sobreno as “an annual fixture in these pages for its superb value,” and wine writer Anthony Dias Blue was calling it “One of best new estates in Toro.”

I’ve admired Finca Sobreno for everyday value for years, but my visit to the winery two summers ago to taste the new releases was an eye-opener. Significant investments in farming and winemaking have taken quality here to new heights. The wines are as ripe, powerful, and explosive as ever, but there’s a new sophistication to the textures and better integration of oak. And – with a little help from importer Fran Kysela – the prices are the best they’ve been in years!