We get that question a lot. It’s not because there aren’t world class wines being made in Virginia. I don’t taste a lot of local wines, but even I’ve had plenty that were outstanding by any criteria you’d care to apply … except one: value for money based 100% on what’s in the bottle.

The truth is that Virginia is an extremely difficult place to grow healthy, flavorful, balanced grapes. Early spring warm spells get the vines going, then late frosts damage the vulnerable buds. It often rains during flowering, knocking would-be-grapes off the vine before they can set. A week or two of extreme heat in summer can give the grapes sunburn, unless it stays cooler and cloudier than normal, and then the grapes struggle to ripen. Mid-summer humidity drives mildew, mold, and rot pressure through the roof, and then early fall rains can cause the grapes to swell, split and rot just as they are ready to harvest.

An Expensive Process
The only way to make fine wine in these conditions is to put in countless hours of vineyard work, drop loads of fruit in the vineyard, and then pick out and toss less than perfect berries on the sorting table. It’s an expensive process. Wineries that planted the right grapes on good soils (in and of itself a challenge in such a young winegrowing region), do all that work, and then toss out much of their fruit in the name of quality aren’t going to turn out a lot of 92 point Cabernets at a $19.99 retail price point!

So, the key to making Virginia wines a great deal in most cases is to make the wine about more than the juice in your glass. That means giving customers the fun of visiting the vineyards, meeting the farmers and winemakers, learning their stories, and coming to appreciate how talented and hardworking they are. Once you add those experiences and a connection to the people who made your wine to the equation, it’s not hard at all to find value for money in Virginia wine.

Exceptions To The Rule
For the most part, Virginia wines in our store live in the “Old Dominion Ghetto” – five to eight slots we reserve for interesting Virginia wines over by the dessert wines and half-bottles. The only Virginia wine we’ve ever slotted in with its global competitors is Jeff White’s Glen Manor Sauvignon Blanc, which ain’t cheap at $24.99 but is at least as fine as California examples that cost more.

Now, we’ve added Tarara Almost Unoaked Chardonnay from Loudoun County to that very short list of Virginia wines you shouldn’t buy because they’re from Virginia – but because they deliver extreme value at their price point compared to similar wines from anywhere in the world. We probably should have seen this coming. After all, Tarara is one of Virginia’s more decorated wineries, turning out three of the first seven Virginia wines to ever earn 90 point ratings in Wine Enthusiast and plenty of medals from the Virginia Governor’s Cup competition.

The 2012 “Almost Unoaked” Chardonnay isn’t one of Tarara’s flagship wines, but we’d gladly offer it up as a fine example of what can be done with Virginia Chardonnay when perfectly ripe fruit gets a gentle touch of wood. Actually, we’d be as enthusiastic about this wine if it was from California, Oregon, or France. This is ripe, refreshing, and refined Chardonnay to drink for the joy of it – with a little extra joy from the very attractive price! 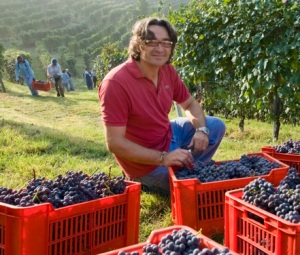 Vietti’s Alfredo Currado, father of current owner/ winemaker Luca Currado, was famous for being one of the first in Barolo to bottle single-vineyard wines and for saving the region’s native white grape, Arneis, from extinction.

But within Piemonte, he’s also revered for being one of the handful of grower/winemakers in the 1970s who believed in the potential of Barbera.

Hard Times. After WWII, times were hard in Piemonte, and Nebbiolo – the region’s greatest grape – was expensive to grow, required long aging in the winery, and hard to sell. Growers turned to planting acres and acres of juicy, tangy, and – most importantly – productive Barbera across the Langhe’s rolling hills.

By 1970, Barbera had become the everyday wine of both farmers and the workers who flocked to Alba’s Fiat and Ferrero Rocher factories. “Barbera” was synonymous with “cheap, working class” wine; a bottle cost a little less than a loaf of bread.

As demand for Barolo and Barbaresco finally began to revive in the late 1970s and early 1980s, growers across the region quickly moved to uproot Barbera growing in top vineyards and re-plant to more respectable and lucrative Nebbiolo. Except for Alfredo Currado, whose winery in Castiglione Falletto practically overlooked the famous Barolo Cru of Brunate and the small vineyard right next to it known locally as “Scarrone.”

A Scarrone Gamble Pays Off. Alfredo’s father-in-law, Mario Vietti, had planted Barbera in Scarrone at the beginning of Piemonte’s economic struggles in the mid-1920s. By the 1970s, these vines had produced wine very different from the common, working-man’s Barbera – a wine of intense, dark color, gutsy black fruit, and a natural spicy note never seen in more common wines. Like all Barbera, even these old vines couldn’t give wine with the tannic structure needed for aging and improving in bottle, but Alfredo realized that he could “borrow” tannins from oak barrels – if he was willing to take on the expense. He took the gamble.

Beginning in the late 1970s, Alfredo became one of the very few Piemonte winemakers to attempt to make fine Barbera – reducing yields, farming with the same care and effort as given to Nebbiolo, and investing in oak casks to shape and structure the juicy, dark fruit. In the early years, Vietti could only sell Scarrone Barbera at a loss – because the notion of paying more than $10 retail for Barbera seemed simply crazy!

By the late 1980s, Alfredo’s son Luca had joined the team and they faced a new challenge: While the old vines at the very core of Scarrone continued to thrive, disease set in around the vineyard’s perimeter. The vines had to come out – presenting the opportunity to put much more profitable Nebbiolo into this very fine Barolo vineyard. So, of course, Luca and Alfredo ripped out about 80% of their Barbera – and, as neighbors watched with gaping mouths and shaking heads – planted more Barbera.

Today, Luca makes two Barberas from Scarrone – the “regular” wine from the vines he and his father planted in 1988 and one of Italy’s more famous and respected wines, the Barbera Scarrone Vigna Vecchia from the less than two acres of vines planted by his grandfather in the 1920s. They always get great reviews from the critics and both are nicely priced right now – reason enough to grab a dozen or half-dozen.

But we love both of these wines because they are that rarest of rare bottlings: wines that are “important” – connected to history and a great site, deeply complex, and age worthy – and also simply stupid fun to drink.

What exactly does “biodynamic” mean? And where is Alto Adige, anyway? A class next Tuesday (May 13) – “The Brilliant Biodynamic Wines of Manincor” – takes on both topics.

This stunning underground winery opened in 2004. Since then, quality has soared at Manincor.

If you haven’t heard of Manincor before now, it’s hardly surprising. The vineyard estate was founded in 1606 and has been in current owner Michael Count Goëss-Enzenberg’s family since 1662. But for virtually all of its 400+ year history, grapes from Manincor’s vineyards went to co-op wineries in nearby Kaltern and Terlan where they formed the backbone of both producers’ top wines.

The modern story of Manincor begins in 1991 when Count Michael took over from his uncle. He soon began what would be a 20-year journey of converting the entire property – orchards, woodlands, meadows and vineyards – first to certified organic farming and ultimately, to Demeter-certified biodynamic viticulture. As the conversion proceeded, Manincor began keeping more and more grapes for itself and bottling wine under its own label.

Then, in 2004, Manincor opened a stunning underground winery beneath a key vineyard, immediately adjacent to the historic Manincor manor house. The winery blends into the vineyard perfectly, uses geothermal heat pumps for heating and cooling, and allows wine to be moved mainly by gravity. Count Michael installed labor-intensive unlined concrete tanks for fermentation and aging (allowing more gentle air exchange than stainless steel) and even added a cooperage – Manincor harvests oak for some barrels in its own forests and dries the wood and builds barrels on the property!

Since the new winery, the quality of the wines here has soared. Over the past few vintages, Manincor has earned four Tre Bicchieri awards from Gambero Rosso (Italy’s most prestigious wine guide) as well as ten Due Bicchieri citations. And while none of the current releases have been reviewed yet, we’re certain all will be raking in the critical praise, too!

We’ve been hearing rumors about Manincor wines for the past few years, but they only recently arrived in our market. Local importer Maurizio Farro represents the estate now, and on Tuesday, he will be joined by winery representative Michael Jaeger to address all questions Alto Adige and Biodynamic. (Sorry, the Count wasn’t available …)

What is Rosso di Montalcino? Like its more famous big brother, Brunello, Montalcino’s Rossos are made from 100% Sangiovese Grosso (the famous “Brunello” clone) grown in and around the Tuscan village of Montalcino. 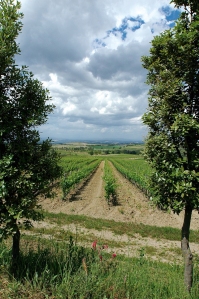 Most good producers treat their Rosso and Brunello identically in the vineyard and through vinification. Some producers make Rosso by basically declassifying selected, weaker lots from their Brunello vineyards. Others have chosen specific vineyards for Rosso that give bright, juicy fruit with lighter tannin than in Brunello vineyards.

In any event, Rosso is a younger, fresher, and much earlier-released version of Brunello di Montalcino. Where Brunello must age for three years before release and have at least two of those years in oak barrels, Rosso can be released as soon as one year after the harvest and is not required to spend any time in wood. The best examples are bursting with vibrant fruit but also spend enough time in (usually used) oak barrels to gain depth, complexity, and at least a touch of the flavors we hope for in fine Brunello.

It’s always tempting to call Rosso di Montalcino a “baby Brunello,” but most lack the depth, complexity and power of their Brunello big brothers – and even more often don’t have the ability to get even better with time in cellar. They can still be great wines – good values to drink young. But now and then there is an exception – the 2011 Rosso of Canalicchio di Sopra is a good example. As Wine Advocate said of this lovely 2011, it’s “a wine that stands out for its personality. Rosso is often sold as a mini-Brunello, a label that unfortunately applies to only a small number of wines. Not here. This is a Rosso of unusual pedigree and distinction. I imagine the 2011 will drink well to age ten, perhaps beyond.”